Posted on November 5, 2018 by bernieLynne

I double checked and I don’t actually have a title that matches this. In all honesty I am a bit surprised by that. It’s seems like in late fall early winter we always clear up loose ends and do an odd assortment of tasks.

We had several early snow falls but fortunately October turned out nicer than September. This meant we got lots of little outside jobs taken care of. Ron switched the mower for the snow blower. While he was in the tractor shed he did some organizing. I got the hydrangeas cut back and built little boxes around them and filled them with leaves. I also managed to pull, dry and pack away some gladiolas. Sadly the snow and a bit of ineptitude on my part meant the dahlias died an ugly mouldy death. Despite what my children thing this was all accomplished without a single photo!

I added to the Something From Nothing with a a November remembrance element. This is something I’ve wanted to do for a couple of years. I’m very happy that I had some additional time to play around with making the poppies. 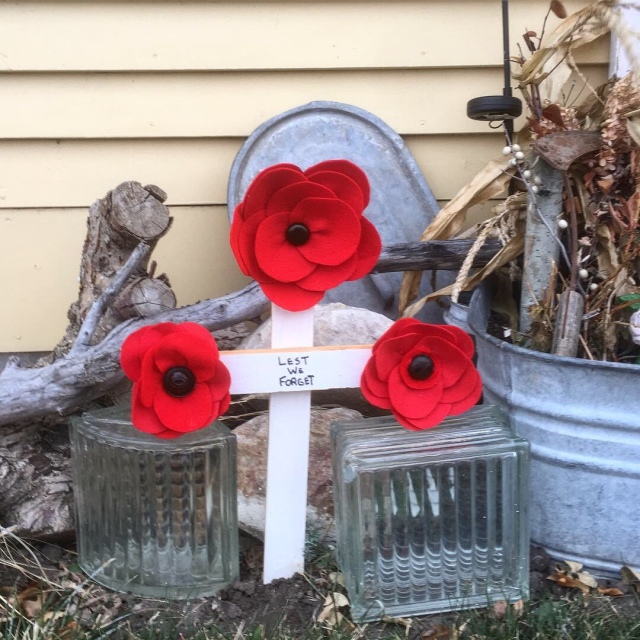 Then last week, when I wanted to clean up the garage so we could use it for parking (like a real garage) he was busy cutting and sanding. He wouldn’t tell me what he was building but I did know he was going free style. Which is pretty unusual for him; no drawing, no numbers and no hints. I must admit the four pieces of lumber weren’t much of a clue and my first two guesses were off. It wasn’t until I saw the 5th piece of lumber and the project was like 90% complete that I understood.

The hangers were a very early house warming gift. They are super cool as they are spikes from the last section of the Canadian railroad that have been reworked as hangers. Glad he created this unique and useful item from this thoughtful gift. 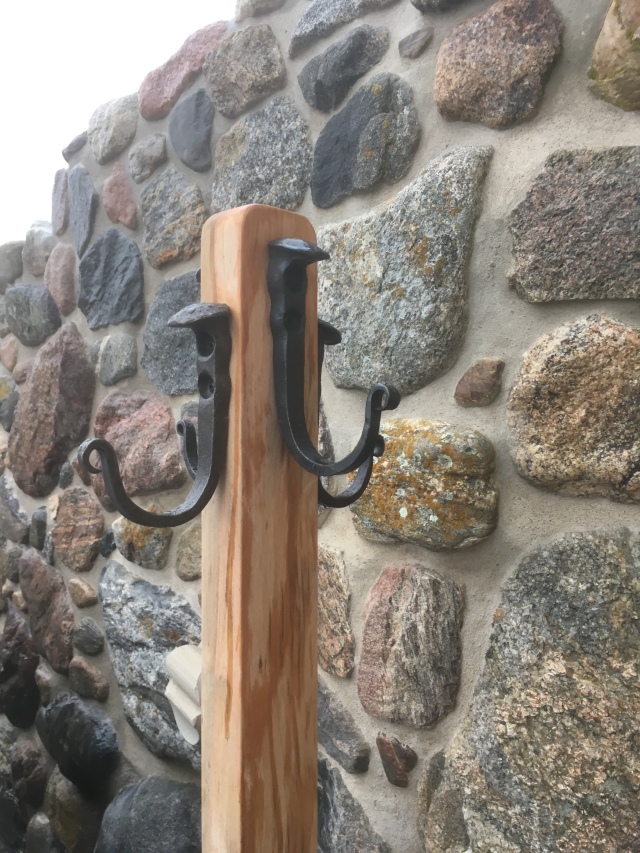 I’ve been working on a few projects as well. Slow progress though it seems but I almost always feel that way.

The original cupboard that I commenced stripping last summer is finally back in the house, sans doors as the hardware isn’t complete yet. But it looks good and once the doors are on I will be so happy I spent all that time on it.

A couple of years ago, just before Little A arrived, I bought a small table and 4 chairs. The colours don’t work so it seems like an easy change. Doesn’t it??

I’ve created a spray booth in the furnace room, with no ventilation. So it’s short bursts once a morning. The lighting is poor. A week on I’ve finished the table but I’m not sure I like it. The colour is good but it’s glossy plus I can’t do the chairs 2 tone if I use spray. So now I’m doing some pondering.

Fortunately Ron came up with 2 small easy projects. The kind I have a skill set for. I redid the material and stitching on one socket holder set and created a brand new holder for a different set. It was a fun little project.

Ron creates a little wooden crate for his tiling tools and I found a handle for it (not pictured here).

He used some ingenuity and found a material that worked for sealing the key holes on the doors. Every year from the inside we have to apply tape to keep the wind from whistling through those holes but he’s found a permanent invisible solution. Of course we still need to deal with the whole door issue but one thing at a time I guess.

It’s been a productive fall which is nice. Now it’s time to start a couple of Christmas presents and some winter projects.