Posted on November 1, 2017 by bernieLynne

My title is a pun on the name of the paving tiles that now are an intrinsic part of our patio. The biggest area is done in the paving stone pattern called Megalibra. But the guys call it W and a Chicken. Yes seriously but more on that later because whatever the pattern name you also have to call it awesome.

All right, now that the awesome sneak preview has been displayed I can get down to the details. Although maybe everyone just wants to see more of the nearly complete project but alas I am recording it all here. The last two posts Starry Starry Night  and Hold The Press are a little light on details.

We’ve been on Peter’s radar for a few years for our patio. It’s not that he wasn’t available but that we weren’t ready so this year with the retaining walls completed it was TIME! We had done a significant amount of the prep work the last time we had the bobcat when we were preparing the site for the hot tub pad and back filling the retaining walls. We had removed the stockpile of huge rocks, cleared out the growth and debris and done base level work. We both recognize that most people would just include this in the scope of work for the contractor but as we established a long time ago we aren’t most people. The plus side to this is that when Peter rolled in he anticpated that it would take four days and it was slightly less than that. Two workers were here on Saturday to lay the base down and level it out. We spent three hours Sunday am working on the ground levels around the base area which definitely made Monday and Tuesday smoother. It was a cold miserable day not that Ron noticed the wind in the bobcat but I did on the shovel end. The area outside of the patio is actually now ready for top soil and seed in the spring. 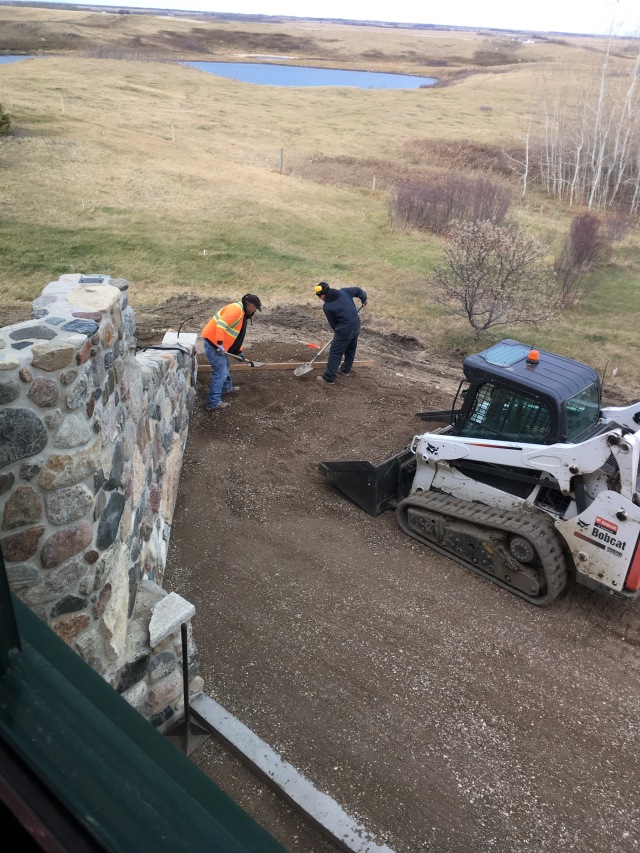 When the full crew rolled in on Monday 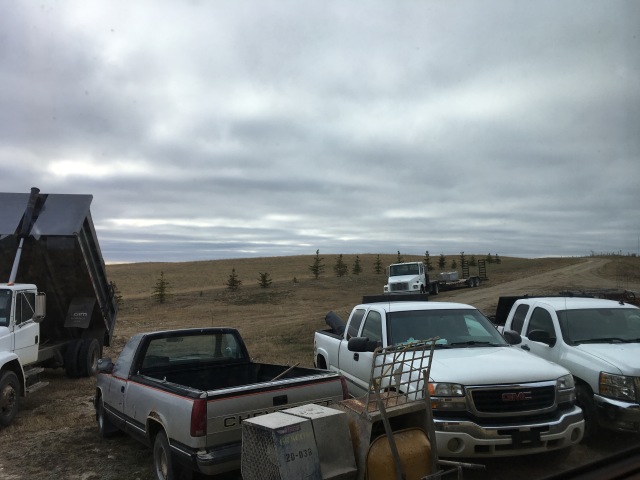 they set to work putting down the sand for the concrete paving tiles. It’s obvious these guys work together as they were like a finely oiled machine without a lot of standing around doing nothing. 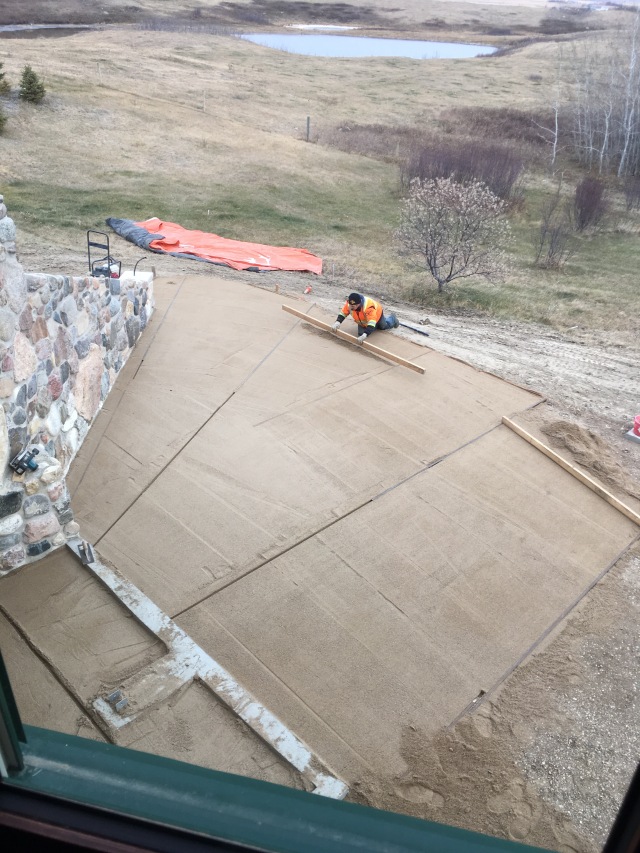 There is some time spent bull shitting while working and they are pretty darn funny to listen to. The guys are no strangers to the fact that I’m a pretty fair hand in the kitchen but they may have been a bit surprised by how much time I spent outside hauling, laying paying stones, helping Ron dig out the pond area and general clean up. 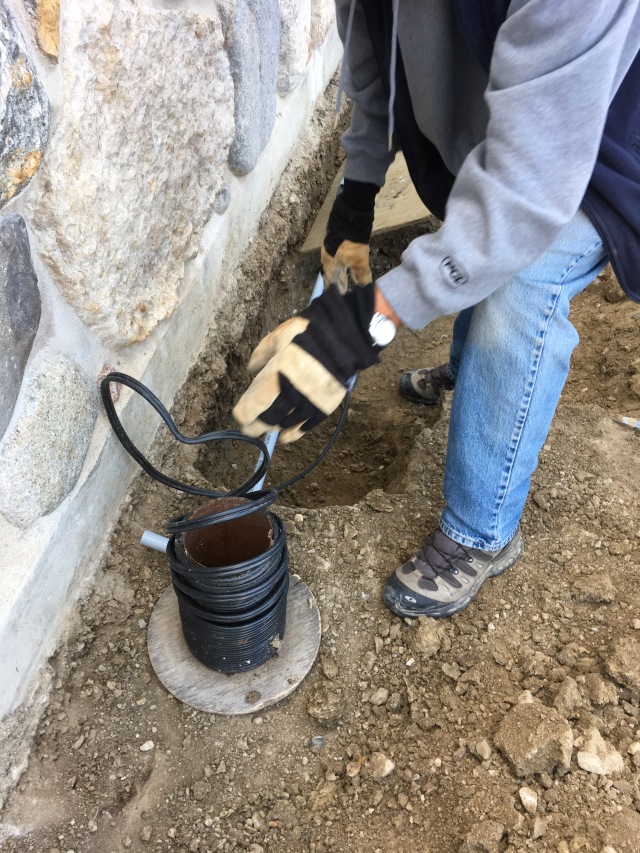 Apparently it isn’t normal for the homeowner to give them a hand but I think they found us a help rather than a hindrance.

I also cooked for them and had soup in the oven both days before they even rolled in the drive way. There was also coffee and cookie breaks because doesn’t everyone work better fueled with good food and warm drinks? 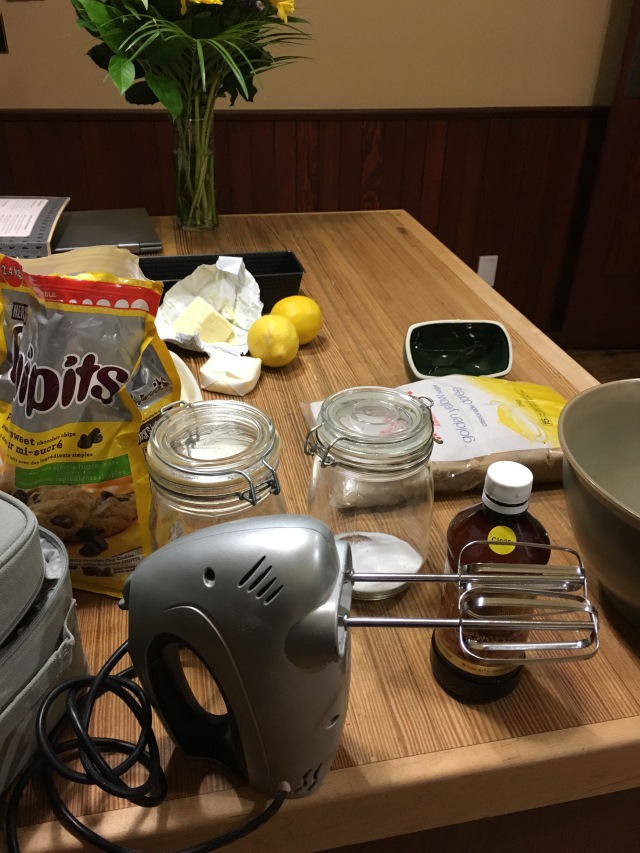 And it’s not like they could take a quick break and go to Tim’s or out for lunch. It was great having a crew around the dining room table and telling them the story of the first home owner, Mrs. Richardson. They say that she used to feed the work crews dinner (farm time lunch meal) and then if anyone laid down in the fields behind the wagon to have a sleep she would see them from the attic and fire them when they came in for the next meal.

I wasn’t in the firing mood but rather on the other end of the spectrum. I was so happy with everything that they did. I’m pretty sure they didn’t share my enthusiasm for laying paving stones and perhaps I wouldn’t have been as energized if they had made me lift the W. I specialized in the chicken

although I thought it looked more like an armadillo. Which apparently is too long to say while you are holding onto something that weighs like 45 pounds and you are trying to figure out where it goes in the pattern. Which looks rather random in some views but seems less random in other views.

Speaking of random, Peter does a mean random. Like a true random. The outdoor kitchen area and the fireplace/pizza oven area tiles were Lafitt. They come in square and rectangular shapes and Peter just pounded this out.

The whole entire patio area was to be encased in 6 x 9″ edge stones called Roman Euro Rustic. When the truck unloaded all the pallets (18 of them) and T rolled them into the walkout area with the bobcat I noticed one off to the side and was curious. I didn’t remember picking out a 6 x 6 tile so I checked the plan, chatted with Ron and then called Peter over. Apparently the 6 x 9 tiles weren’t available so it was substitute. I told him I didn’t think I would pull a Sarah Baeumler and delay the project till the other size was available. We liked the other size as it didn’t seem so small compared to the big huge tiles.

The end of day one saw all the big megalibra tiles put into place and the outdoor kitchen area completed. The fireplace/pizza oven was prepped and the 6 x 6’s put in place and then the whole thing was “put to bed” with tarps for the night. 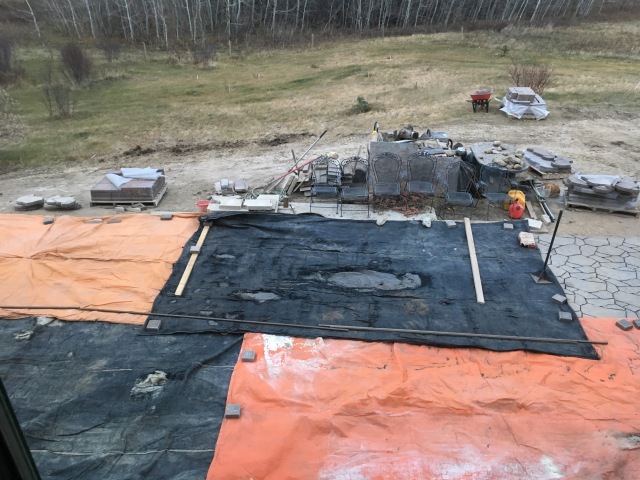 Which was nice because it meant the dog could finally go outside as he wasn’t allowed around the freshly leveled sand and the workers being the friendly sort he is.

Day two was the finishing work so less chat and haul with more saw running. They had two saws cutting away the wonky edges so that the stones butted up against the rock wall or the edge tile.

Noisy and dusty so I wasn’t super sad to miss that because I was at work. I left the snacks and the soup so I don’t know if they missed me at all!

The pond area at the end of day one had the metrix blocks in with the heavy liner but we needed the pump and the fittings before we could proceed. 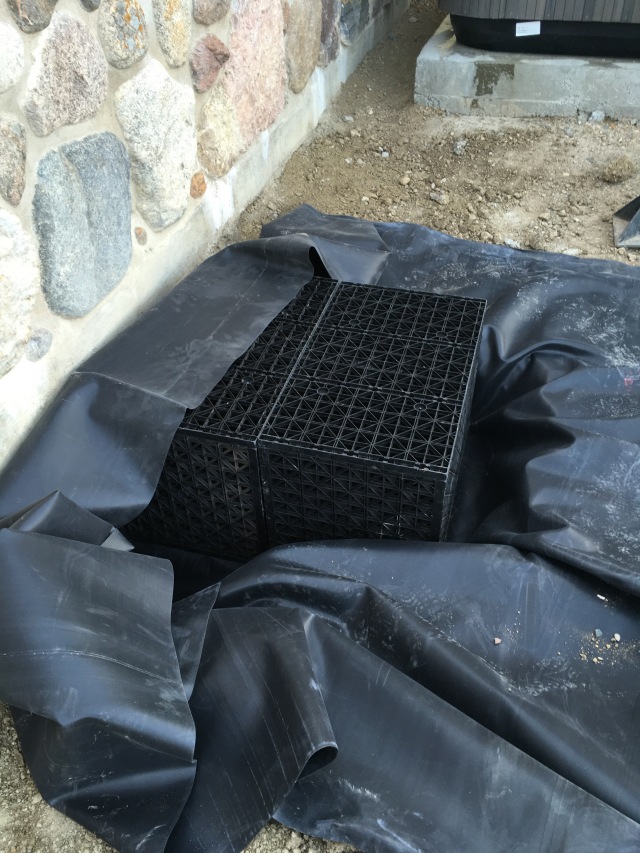 So Ron completed that work Tuesday am and then the base, sand and paving stone were laid there.

There was also the discussion and the subsequent work around the hot tub area. Ron wanted big rocks on two sides of the hot tub right against the concrete pad, I wanted them on top of the paving stones so no weeds would grow. Either way the paving stones had to be cut so the guys didn’t care we just had to make a decision. Yeah whatever, sometimes I win little ones but not this time. They had to get the rocks there which meant driving on the new patio so thick boards were put down, rocks loaded up, set down to mark, picked up, paving stones cut out, rocks laid down and repeat. All in the cold with the wind blowing down your back. 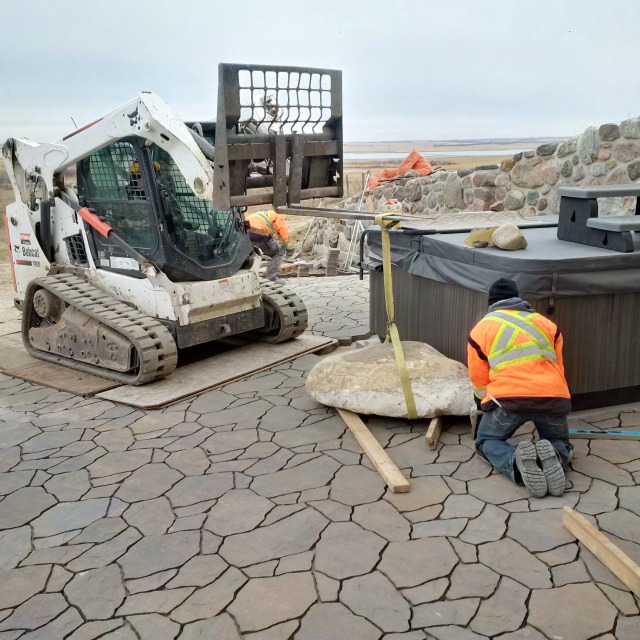 When they rolled out at the end of day two it was just the pond area that was missing the paving stones that was tarped. Seems they needed 19 pallets and only had 18 so only if luck was on our side would it get complete before winter truly descended.

Ron in the meantime had taken the bobcat down and picked up a few more rocks for the pond and hot tub area. 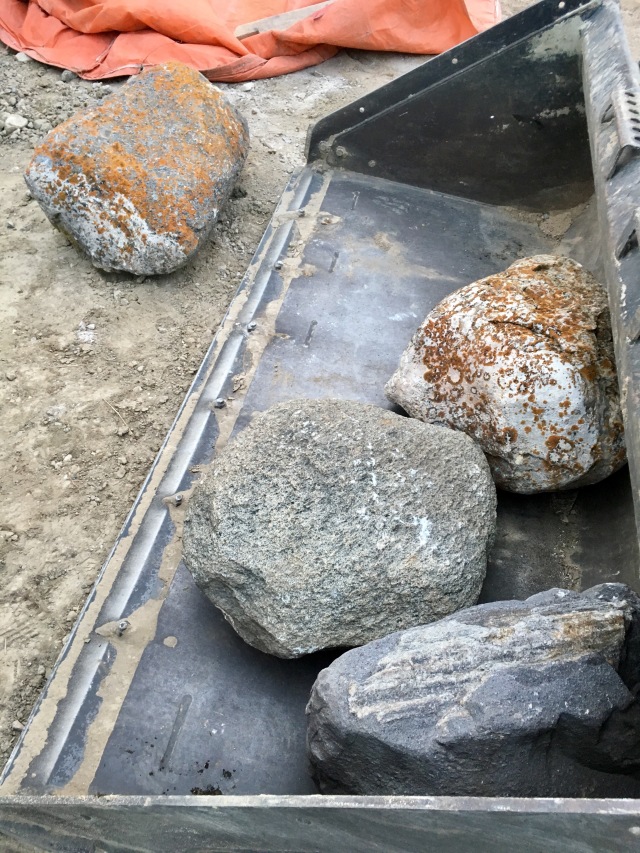 I really wasn’t all that hopeful. Peter wasn’t sure he could get more Megalibra pavers on short notice. So I was totally over the moon when I came home today and saw the pavers in place, the remaining rocks in place and just the little pond area needed the small rock fill. We have to figure out a “camouflage” rock for the pump and plug-in but that’s a spring job as is the sand in the joints. 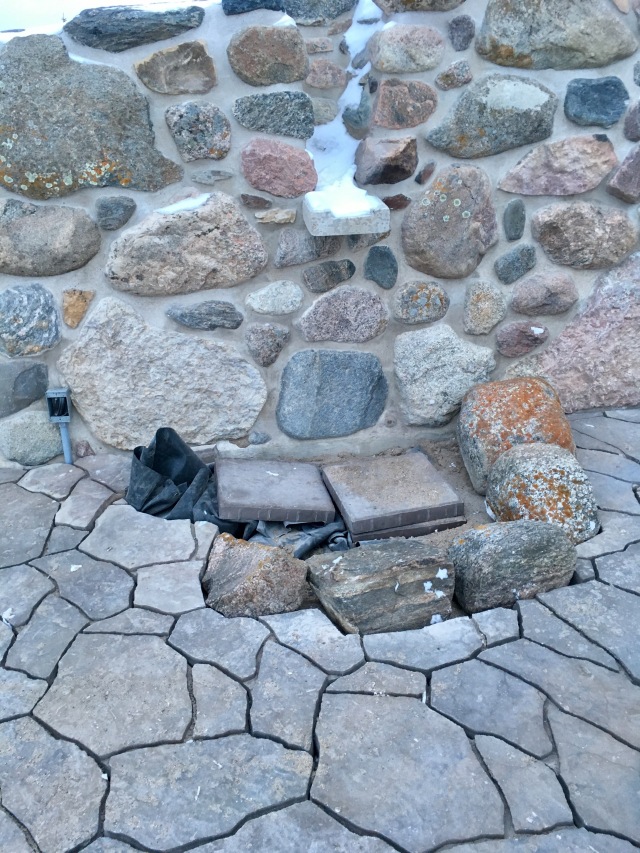 It’s patio party time!! Alas it’s also snow time but what the heck we put the chairs out like we were going to have a fire! The mat is in front of the hot tub and the BBQ is back in place.  It feels so weird to step out the walk out-door onto a level surface! I’m already planning the lounge area and the quiet reflective area to complete the transformation but alas it’s not a TV show so that will have to wait till spring!

It’s also totally amazing that it is so close in reality to what the original drawing depicted. Plus it was done so quickly and professionally by Precision Paving. Shout out to our friend Peter and his skilled work crew for working so diligently to complete it.

Strangely enough I’m looking forward to next spring when we can start the final stone builds; outdoor kitchen cabinet,  fireplace/pizza oven, connecting retaining wall (about 10 feet) and the verandah base. Then it is time to build the verandah and balcony; just in time for the house to celebrate it’s 100 years!!